Ceiling water damage can be caused by many things. Leaking pipes and excessive rain drops can be some of the causes.

Sometimes, woods and water might not be good together. A long duration of contact with water will make woods damaged and deteriorated.

Furthermore, ignoring the damage would only lead to more problems. In the long term, the water damage would let the mold grows.

Mold on woods could mean a disaster. Eventually, the ceiling can be break, and it will be dangerous for the family living in the house.

In fact, you can repair ceiling water damage with a few home repairing tools. However, if you are not too handy to do it, you can call a professional to do the job.

Sure, the more serious the problem is, the harder it is to repair. At least, you can check the damage level and decide what to do next.

First, you will need to check for the water source and stop it. If there are leaks on water pipes, you have to find the location and replace the pipes. Another possible water source is from a broken roof.

Before you repair the ceiling, our recommendation is that you find the water source first. Fixing the problem from the root will make the rest of the work easier.

To check for the source, you can see the visible trace on walls, floors, and ceilings. On walls and ceilings, there might be discolorations if a leak is present.

Moreover, leaks can cause wooden flooring to warp. Damp carpets can also be the sign that there is water dripping from the ceiling.

The next thing you have to do is to dry the ceiling from above and below. If the leaks are still occurring, you may have to check the drywall. It can be piling up water inside and causes the ceiling to be damped.

Before you do the work, make sure that the floor and furniture under the working area are covered with a tarp or plastic bag.

After the ceiling get dry, you may remove the affected patches one by one. Ceilings are usually made of large wood patches. Removing them will let you see the problem behind the ceiling.

If the wood isn’t damaged and only the surface is affected, you can scrape the paint away. In this case, use a paint scraper or putty knife to scrape the ceiling’s surface. Water damaged ceiling and walls usually have chipping or flaking paint.

Next, you need to check whether you need to replace the drywall or not. However, the cost will depend largely on the size of the affected area. Be prepared for the budget if you have a big problem on your ceiling.

Painting the ceiling would be the last step on the ceiling reparation. First, you have to apply the primer before painting it.

To avoid unmatched color, it is recommended that you paint the whole ceiling. Though you are buying the same paint color, it could still be different due to age and weather. 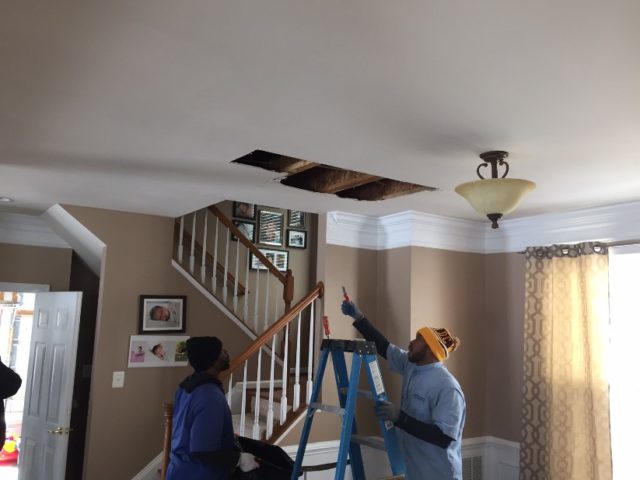 It means you cannot rely on the insurance claim to pay for the ceiling water damage.

You are expected to fix the problem before it gets worse. So, if the ceiling is already damaged by water in a long time and you make an insurance claim, the insurance company will be less likely to approve.

Otherwise, ceiling water damage caused by major disasters like the storm may be covered by the homeowners’ insurance. Yet, you have to make a claim as soon as possible after the storm happens.

Since water damage on the ceiling can happen to just any house, you better check your insurance policy before buying it.

As you cannot rely on the insurance claim, you probably have to spend some from your savings to repair the ceiling damage. However, you can save some expenses if you do all the work.

The materials would not need too many expenses as you can buy them for roughly $100 to $150.

Labor cost for a repairman is $400 per project. It does not include the replacements for woods, drywall, wall paint, and primer. Indeed, the labor will cost higher than the material.

Some services shop may offer around $500 to $1,200 for the whole reparation. Though it is a rather pricey, the repairman may give you a guarantee if a problem still presents short after.

Leaving it to the professional does not mean that you won’t stay on the site. The repairman would need some information relating to the problem. Some questions that would be asked are:

The repairman needs the information to diagnose the ceiling problem especially when the problem has become critical. Thus, you will need to coordinate well with the repairman so that the problem can be solved completely.

How to Prevent Water Damage to Ceiling

Once you have your ceiling back like new, now you have to know how to prevent the problem from reoccurring. So, you wouldn’t have to repeat the long process of repairing and spend some budget on it.

To prevent the water damage on your house and ceilings, here are some things that you can do:

All in all, ceiling water damage should be treated properly. It will not only deteriorate the house, but it will also devalue the house. So, before it gets worse, make sure you get rid of the ceiling problem.