Mold and mildew are the type of fungi commonly found in most households. Both of them have similar characteristics; they grow in the damp area and may cause a health problem.

However, they present different risks and need different approaches to be removed. To be able to get rid of them completely, we need to distinguish the difference between mold and mildew.

Mold is a term to call an inclusive group of fungi. There are more than ten thousands of fungi species reside under this term.

Mold could live inside buildings or outside. In most households, it grows in various places such as paper, leather, woods, or paints on the wall, but it always needs moisture and something organic to feed on.

How does it differ with mildew? Mildew is a small subgroup of mold. It is a part of mold family. Mildew has a specific name because, unlike ordinary mold, it acts as a parasite on living organism. It only infects plants.

However, people incorrectly call ordinary mold as mildew. In biological term, no mildew ever grows on buildings because mildew species are obligate biotrophic organisms, which means they can only thrive on living substrates.

Do mold and mildew differ in colors?

As mold in households consists of more than 200 species, it can present in a wide variety of colors; black mold, blue-green mold, brown, red mold, gray, dark orange mold, tan, yellow mold, and even white mold.

Yes, white specks on your house most probably are not mildew, but mold.

Mildew, on the contrary, only consists of two sub-groups. They present in white or gray color, but some of them can cause discoloration; it turns the leaves from green to yellow.

Some people use the term mildew for white spots on the house which turns black after a while. But that one on the building is not mildew, and the color turns black because it is actually a mold.

How to tell the difference between mold and mildew from their texture? 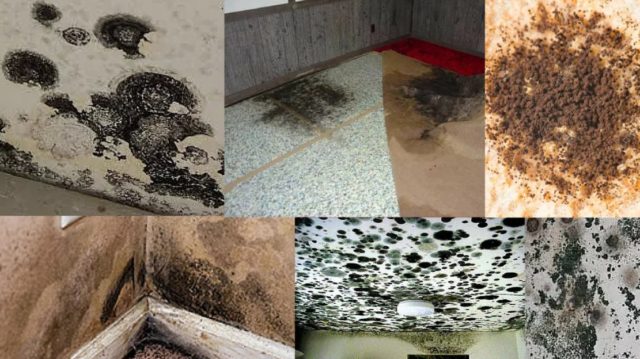 Do mold and mildew cause the same disease?

In general, mold causes more health problem than mildew. Both of them can irritate respiratory tract when inhaled. The symptoms are coughing and throat discomfort. However, some molds secrete a toxin which can be harmful to human.

Mold can cause allergy, pneumonia, sinusitis, and rashes. Research in 2007 also showed that mold is associated with depression.

Mildew only causes mild irritation to the respiratory tract. It is most harmful to plants.

Do they have beneficial uses?

Yes, mold has beneficial uses. Some of them are used in food manufacturing process. Some of them could even produce drugs, such as from genus Penicillium. It is the mold from which the name penicillin comes from.

Mildew, to this day, has not been known to have beneficial uses for a human. As for plants, it is a disadvantage.

Do they cause structural damage?

Even if your indoor plant is infested with mildew, and the splotchy white substance falls to a nearby area, it won’t cause damage.

How to get rid of mold and mildew?

Now that the difference is clear, we can determine how to get rid of mold and mildew. Most mold clean-up products advertise its efficacy for mildew as well.

However, if we use the term correctly, using that chemical to remove mildew on plants can be harmful to the plant.

To get rid of mildew on your plant, most experts recommend cutting the infested part. If you keep it indoor, bring it outdoor for a while. Don’t forget to disinfect the tools you use to handle mildew-infected plant.

If the ‘mildew’ present on house surface, it is most likely a mold. You should follow the treatment for mold. Sometimes the term mildew is used to express less extensive mold or early stage mold.

But the incorrect use of the term doesn’t change the treatment procedure.

Some mold on its early stage is pretty easy to manage. You can use DIY remedies such as vinegar, bleach, or peroxide. Be careful not to mix those agents, as they may result in the toxic substance.

Dilute bleach in water because the high concentration may cause ugly discoloration on your house surface.

As mold spore inhalation can be hazardous, you should use proper protection in removing mold. Always use mask and gloves when doing the DIY removal.

If you use stronger agents like bleach/chlorine or peroxide, you need to use an N95 mask. It has tighter pores which prevent smaller particles from entering the airways.

If the mold is widespread and potentially hazardous, it is always safer to consult professionals. They have the expertise to tell the difference between mold and mildew.

They will assess the risk, the type, the potential damage, and what is the best way to get rid of it.